skip to main | skip to sidebar

I’m writing this from a beach chair at Publix beside my dead car, awaiting the tow truck. The Florida sun is doing what the Florida sun does, and the clouds look like they’re stirring up to do what Florida clouds do, what they did yesterday.
Yesterday, we dropped the van at a local retirement village, and took the car about three miles away to a public kayak put-in. We’d drop into Shingle Creek, take a south passage through a promising cypress stand to where it joins a more sizable river, and pull back out at the retirement village. There’d we’d visit a friend of ours, and gather everything up a for a nice ride home.
...
To be continued.
...
The car's safely at the shop now and I'm back in the air conditioning, clicking a real keyboard.
...
The put-in went smoothly. We were flowing with the current, concerned only the Florida sun might burn us before we arrived at our friend's. Laziness was our watchword. Dana hates adventure, and we were both content to watch the sun dappling the river-bottom through tannin-infused water. A leaf rolling with the flow tumbled into a sun-beam and glowed fiery red from under the water. Just as quickly, it rolled back over to its brown side and relinquished the spotlight to some duckweed or a spray of stray bubbles rising from the muck.
At points there were interesting things on the other side of the river, but paddling way over there was far too much work. We drifted for nearly an hour, enjoying Florida and admiring the stream as it narrowed. Soon, we could touch trees on both sides of our channel at the same time. The water was still there, but it was no longer gathered into a neat creek. Instead, it spread wide throughout a plain of cypress. The Everglades are like this. They call it, "The River of Grass," because it's actually a single miles-wide river running slow and shallow across our virtually level state.
Our creek became a river of cypress.
Towering cypress are always surrounded by nubbins called "cypress knees," about 12 inches tall. We found ourselves snaking between knees, dodging peacefully left and right, wending our way, following the best flow of our channel. We noticed quickly the best path was always marked by orange trail blazes. Someone had mapped a course through our maze, and we had only to follow it.
Who knows how far we went in the next hour. We don't. One mile? Two? Like the frog in the slowly warming water, we'd noticed the channel overgrowing but we saw only reason for hope. At one point, I'd had to jump out of the kayak to help it over a log. At another we were bunny hopping ourselves over multiple submerged logs. All the while, the tree cover was growing thicker, the shade deeper, the weeds wilder, the water darker, and channel narrower. But the little orange blazes beckoned us onward with their promise of passage. Someone had gone before us.
The blazes continued past the sign that said the trail ends, and so did we.
The little things kept lightening our mood. A flock of ibis or a beautiful egret not used to seeing people. A wine bottle tied up as a sign to weary travelers. Cypress knees like mini terracotta armies, mothers with babies, or some other abstract art. And the little things kept darkening our mood, too. More and bigger spiders than I'd ever seen in my life falling into our kayak by the dozens, the sound of solid limbs hitting and poking our inflatable kayak, the bubbles popping on the surface when I stepped in especially organic muck. I don't know how many times I looked at the boat to see whether the bubbles were coming from the muck or a puncture.
A half hour after passing the end of the trail, the water flowed under some weird field of lily pads too thick to break with paddles. I was out on foot again, but we passed safely through and the orange blazes led us on. There were chainsaw cuts keeping the path clear, but before long I was walking and towing the kayak far more than we were paddling. Once we completed our passage and joined the main river, though, all would be well. We were much later than we'd planned, much muddier than our friend would understand, and anxious to get back to our car again before they locked the gate behind us, but success would make it all worth while. Darkness was still a ways off, even if the gathering clouds hid the sun nearly as effectively.
My ankle became a concern. It had been a week and a half since I wrenched it. It had been improving steadily, but none of us was banking on it doing the job I was asking of it today. The water averaged calf-deep, and so did the muck. I was usually thigh-deep in muck and brown water before my feet found purchase, kicking and tripping the whole time over invisible, submerged logs of every shape and firmness. Sometimes I could stand on them, and sometimes I'd slide from them instead. Progress was measured in brown stumbles and hard towing, but progress we did. I'd very nearly decided not to wear an ankle brace for a quiet paddle down a lazy river. I was so glad to have erred toward caution this once. And I was glad for the cooling effect of the water to keep the swelling down. 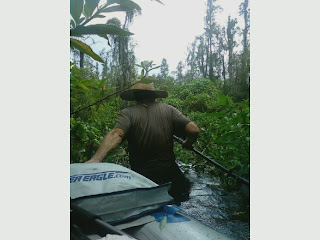 In a final babble of promise, the water sped up. It was an exciting sign. The land was coming together and our channel deepening. Maybe our Shingle Creek passage would finally be complete, and we were about to join our river. We took hope.
The river presented us with another log, though, and this one too big to go over. We'd have to portage. Before we did that, I figured I'd walk ahead to see how much further the river really was.  I tried three paths. All were completely impassable. The portage wouldn't work.
Shingle Creek said, "No." Instead of triumphing, we'd stumble back through every turn and twist and log and slip. We were going back.
The clouds picked up on our mood and chose that minute to do what Florida clouds do. The drizzle gained heft and speed, and drowned our last flicker of hope. We both wear glasses, so the rain added a level of difficulty to our journey. Spotting the faded orange blazes was much more important now, and we had to see them without windshield wipers. Trying to stay in the boat whenever the lightning was especially close only added to the injuries already inflicted.
And now we were fighting the clock. Dark comes after 8:00, and we were well past 5:00. We'd been three hours getting so far with the current, and the way back would be harder to find. The way down was only a matter of sticking to the deepest water. The way back held two critical turns we knew we could miss.
There were no options. We started.
We rolled fifty or more of our orange blazes back up, the clock ticking faster than we could slog or paddle. Every single sighting of orange was a drama, but we kept finding them. And suddenly we didn't see any more. There'd been one confusing decision with an orange to our front and an orange to the left. We'd gone forward. A hundred yards later, we'd seen nothing but white/blue blazes. We were familiar with those, but orange had brung us, and it was orange we'd go home with. Back we went. We tracked left and were rewarded with a dozen more orange blazes, then they dried up, too.
We backtracked yet again to our last orange blaze and stopped. Cold. We had options aplenty, but it was 7:00, and the bewildering (today I notice "wilderness" is at the root of "bewilder") cypress didn't have that "I'm Tom Bodett, and we'll leave the lights on," kind of feeling. We didn't sense the welcome to spend our night amongst God's cypress knee armies. We were no more than a mile or two from our car, but we were an hour from dark and the odds we'd find the right path in that hour grew closer and closer to zero.
Each moment wasted on hesitation felt like a judgment day.
All the obvious thoughts came to mind. Quietly shivering all night in a damp kayak, crying uncle then waiting for the helicopter and floodlights, listening to our friends tell us how we should have been more prepared, several dozen Readers' Digest survival stories, alligators anywhere (along with snakes and untold bugs.) The mind is not always our best friend.
We decided.
It turns out my ancient BlackBerry actually does have a functioning GPS which the 911 operator can access. She calmly explained to us that at that very moment there was a cozy little subdivision just 150 yards to our West. We squinted as hard as we could to the West, and had to take her word for it. There was nothing but cypress to be seen, but we abandoned the kayak and struck off. She corrected our course to the left as we went, and 70 yards later we finally saw the first rooftop.
Cypress swamps are thick.

As near as I can tell, I've mapped our route at MapMyRide (choose Satellite view to see the cypress stand, and zoom out a bit to see where we were trying to go.) Your guess is frankly as good as ours where we stopped, but it was down there somewhere.
We ended up having to skirt a retention pond, but soon we were on manicured grass again. (My heart warmed a little bit toward manicured grass.) I went back, found, deflated, and hauled out the kayak. A friend came and drove us back to our car, and we headed back to the van with all our stuff. At 9:00 we did make it to the van just before the car died. Of course, that the car died was only appropriate after the day we'd had so far. The check engine light had been on for a day, but it was just an oxygen sensor warning - no big deal. I figured I'd get it to the shop on Tuesday, and we'd live with bad mileage until then. Not this time. This time we'd be transferring things to the van and leaving the car in the Publix parking lot until I could get back to it.
Three days later, we have the car back at home and running well. It was a cracked vacuum line that chose a quiet Sunday afternoon to finally break. The kayak seems no worse for wear, and we've found no ticks or spider bites to remind us of our adventure. I've got a little poison oak, but not enough to really trouble me. Time will have to tell whether our fancy Nikon d3100 survived the adventure, though. We're going to let it dry a bit longer before we put the battery back in.
I could not be more relieved things ended so easily. There were no sirens, no night in the swamp, and a story to tell for a long time.
Already I'm starting to look back on the trip fondly.
Posted by Kevin Knox at 9/04/2013 09:54:00 PM 2 comments:

Kevin Knox
College dropout, 4 years in the army, 10 as a diesel mechanic, going on 20 in programming. I've been a nose-down programmer, a release engineer, and now maintain Microsoft and Java web servers. I make sure the code works its way through to market. Hence, codepoke.